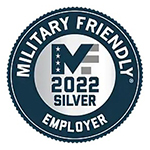 Military Friendly® status recognizes an organization’s commitment, effort, and success in creating sustainable and meaningful benefits for the military community.

The Military Friendly® Supplier Diversity Program list identifies companies that demonstrate their commitment to the veteran community by the extent to which they include veteran-owned businesses in their supplier diversity programs. RTI ranked fourth in the government and nonprofit category.

“As an organization headquartered in North Carolina, which has a significant military population, we know that veterans can bring a unique set of skills and leadership qualities to their employers,” said Lisa May, RTI’s Executive Vice President of Human Resources and Corporate Communications. “RTI is better for having veterans as members of its workforce and supply chain. They enrich our culture, strengthen our organization, and help us reflect and embrace diversity and inclusion in the workplace.”

Institutions earning the Military Friendly® Employer designation were evaluated using both public data sources and responses from a proprietary survey. More than a thousand companies participated in the survey.

Methodology, criteria, and weightings were determined by VIQTORY with input from the Military Friendly® Advisory Council of independent leaders in the higher education and military recruitment community.

“Companies earning the Military Friendly Employers® designation create and elevate the standard for military programs across the globe, they have invested in substantive programs to recruit, retain, and advance the veterans and service members within their organizations,” said Kayla Lopez, Director of Military Partnerships, Military Friendly®. “To them, hiring veterans and servicemembers is more than just the right thing to do, it makes good business sense.”

About Military Friendly® Employers
Military Friendly® is the standard that measures an organization’s commitment, effort, and success in creating sustainable and meaningful benefits for the military community. Over 1,500 organizations compete annually for Military Friendly® designation. Military Friendly® ratings are owned by Viqtory, Inc., a service-disabled, veteran-owned small business. Viqtory is not affiliated with or endorsed by the U.S. Department of Defense or the federal government. Results are produced via a rules-based algorithm.