The US Food and Drug Administration (FDA) is no longer requiring a black box warning on the label for the drug FORTEO® (teriparatide) and has released the drug’s sponsor from its post-market commitments.  These moves were based on results from 18 years of epidemiologic research conducted by RTI-Health Solutions (RTI-HS) along with additional real-world research evidence.

In 2003, the drug received approval from the FDA for the treatment of glucocorticoid-induced osteoporosis in post-menopausal women at high risk for fracture. Because research had shown that the drug could increase the incidence of osteosarcoma (malignant bone tumors) in rats under certain dosing conditions, the FDA required a black box warning on the label stating potential risks. In addition, they required research evaluating whether FORTEO® might cause osteosarcoma in humans.  RTI-HS initiated case-finding studies in the US and the five Nordic countries.

When the indication later expanded to men and younger adults, a prospective, single-arm, patient registry was required. Two comparative studies using Medicare and commercial health care claims were initiated proactively by the sponsor and researchers (RTI-HS and another investigator). In all, studies were carried out over 18 years using different methods to examine the same question. The studies were accomplished with integrated teams that included researchers in epidemiology, biostatistics, and, for three studies, survey research. 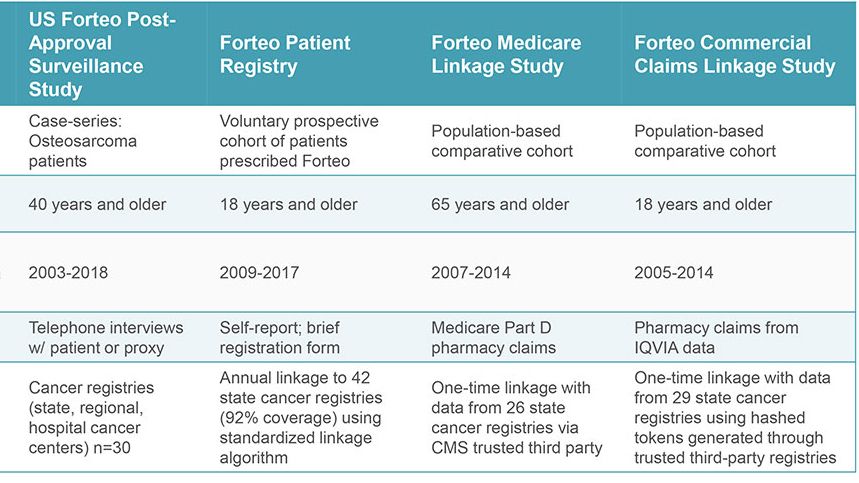 Throughout the US, RTI-HS worked with 45 state cancer registries and several comprehensive cancer centers. These registries identified cases of osteosarcoma for the case-finding study. RTI-HS interviewed patients about any prior use of FORTEO®, other medications taken, and cancer risk factors. In the other studies, Information on FORTEO® patients (and in two studies, comparator patients) was linked to cancer registry data to identify new osteosarcoma cases. RTI-HS managed the recruitment and linkage processes with cancer registries – including one study conducted by a different investigator.  The prospective registry, operated wholly by RTI-HS, enrolled more than 75,000 patients over ten years.

In the end, studies showed that a similar risk exists between FORTEO® users and their comparators, or the general population. The studies essentially ruled out any but a small potential increase in risk.  This finding was reassuring given how rare osteosarcoma is in adults (approximately three in one million person-years).  Due to the strength of the findings and other post-marketing experience, the drug sponsor was able to end their post-market commitment five years ahead of schedule.